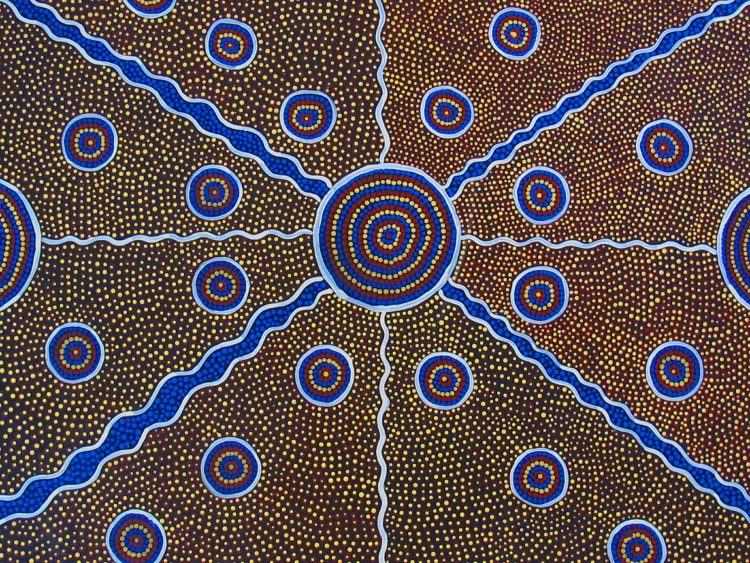 Dr. George Tjapaltjarri is one of Australia’s “Grand Old Men” of Aboriginal Art.  Emerging from the desert in 1964, where he had led the traditional nomadic life. Known simply as “Dr. George”, he is recognised amongst his tribe as an Aboriginal Doctor and today is attached to the Kintore Clinic in Katherine, in the Northern Territory.

In the mid to late 1970’s Dr. George Tjapaltjarri took up modern art and began painting for the Papunya Tula Artists. He then expanded his repertoire from painting to pursue traditional teachings and medicine. In the late 1970’s through to the early 1980’s Dr. Tjapaltjarri worked as a traditional healer serving the Kintore and Tjukurla Medical clinics, where he acquired the nickname “Doctor”. The title reflected his respected position as a traditional medicine man for his people, which covered the vast sweep of the Karrinwara and Kilingya country.

Dr. George Ward Tjapaltjarri’s nickname as “The Doctor” is due to his skills in traditional healing together with his extensive knowledge of bush medicines. Dr. George is often employed by Central Australian Aboriginal medical units to carry out traditional medicine.

In this role, Dr. George’s interests lie in imparting his extensive knowledge of the environment, nature, bush crafts and traditional healing to his community.

Doctor George enjoys international recognition for his role as one in a small, elite group of artists whose work powered the Central Australian Art Movement in the late 1960’s.

As well as being a traditional medicine man, Doctor George is an important Pintupi elder, responsible for supervising the initiation of young men into their rich cultural life. This responsibility entails revealing to them the secret knowledge connected with the ‘Tingari Cycle’. Doctor George depicts this wide sweep of cultural knowledge in his artworks, which display a bold series of horizontal and vertical lines representing the individual ceremonial body paint designs worn by young men during their Malliera initiation ceremonies.

Within his artworks, Doctor George often depicts the ceremonial sites associated with these designs from his Pulpina country deep in Western Australia’s Gibson Desert. The body paint designs appear to imply a strong association with the evocative desert landscape, its soak-ages, sand hills and dry creek beds. The authentic body paint markings invoke both the tradition and the power of the sacred story they are intimately connected to.

Doctor George’s reputation as a traditional artist is founded on his Tingari paintings. Dreaming’s associated with the Tingari form part of a secret and sacred cultural tradition stretching back thousands of years. These traditions form the core of important men’s business, providing the foundation of much of their law.

The colours represented in Dr. George’s painting hold great significance in the Western Desert culture. Dr. George utilises the traditional colours provided by his raw materials; pigments, clay and charcoal, which are: red, yellow, white and black. The concentric design is typical of the “Tingari Dreaming” art form and at least partially relates to the great expanses covered by the Tingari in their mythological Creation Period.

In their myths, the Tingari beings are said to have travelled to different desert regions where they created landforms and taught law. The colour white in Tingari art is significant, as it usually depicts the presence of water a treasured commodity in the desert regions.

In addition to his work serving his far-flung community as a traditional medicine man, Dr. George finds himself in wider demand for his traditional artistic skills. These days, Dr. George Ward Tjapaltjarri is a highly collectable indigenous artist, with his preferred medium being acrylic paint on canvas.

A Little Spare Time Can Go a Long Way