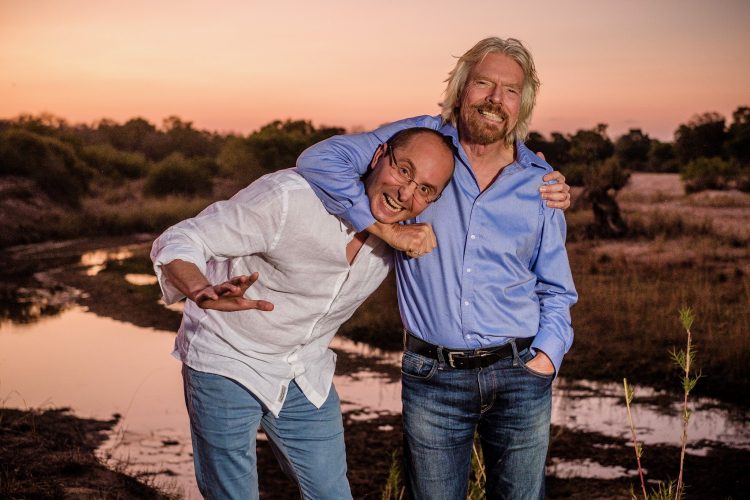 When the invitation from Virgin Unite arrived, asking Mare and I to join Richard Branson and a group of incredible entrepreneurs on safari, it was one of those “pinch yourself” moments.

How does a refugee kid from the suburbs of Sydney find himself at one of the most exclusive gatherings of entrepreneurs and movement makers in the world? And what does he learn when he does?

Well, we had a lot of time with Richard because unlike other events on Necker Island, this one was much more intimate with only a small group of us. Which means this article could easily be a book with details of what happened and the impact it had on me.

Instead, I’ve narrowed it down to a handful of takeaways. These are the things that have had the biggest impact on me and my business since getting back (and there is a lot more I’m still processing).

Focus On The Human Side Of Business 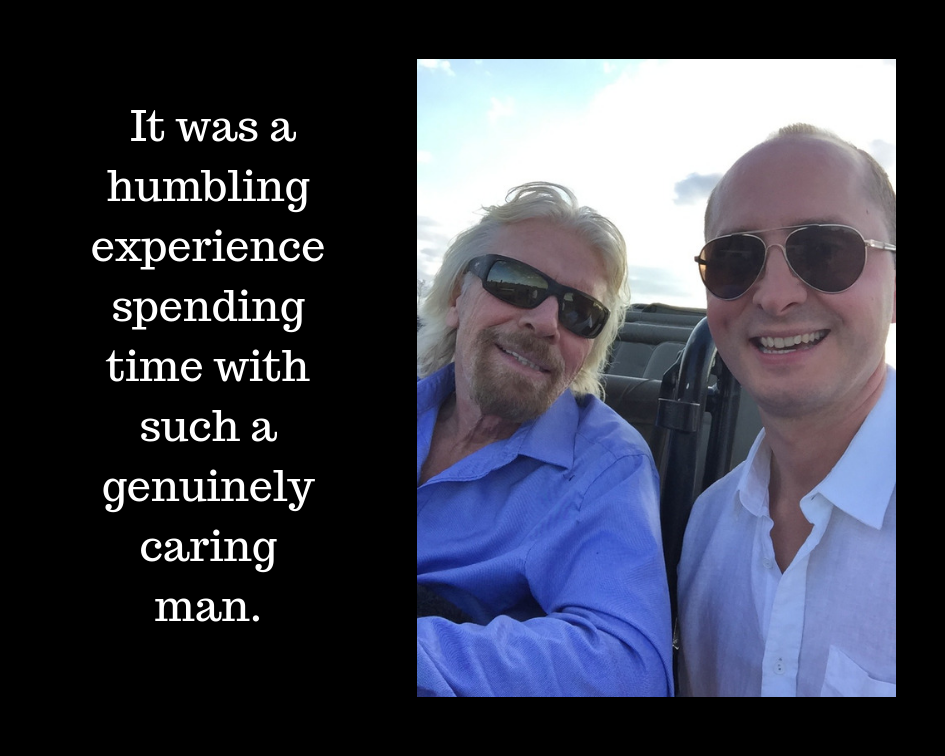 Getting to know Richard personally showed me that despite being an introvert he really cares for people.

The first night at dinner Mare said to him, “It must be tough, you’ve got all these people here who want to see and speak to you.” Richard responded with a warm smile saying, “Yes, but luckily I love people.”

Here is this billionaire-philanthropist-rockstar who could be spending time with anyone on the planet and there were no grand announcements or red carpets when he rocked up each day. He just casually came in, chatted, asked questions about us, and had a laugh.

He loves the people around him – his team, his customers, the people he helps. That’s why he does what he does. Business is a group of people giving other human beings a solution to a problem they’re having.

In business it can be very easy to get caught up in the numbers, webpages, videos and a thousand other things, but what really counts are the human beings behind it all.

Put Your Team First, Above All Else. 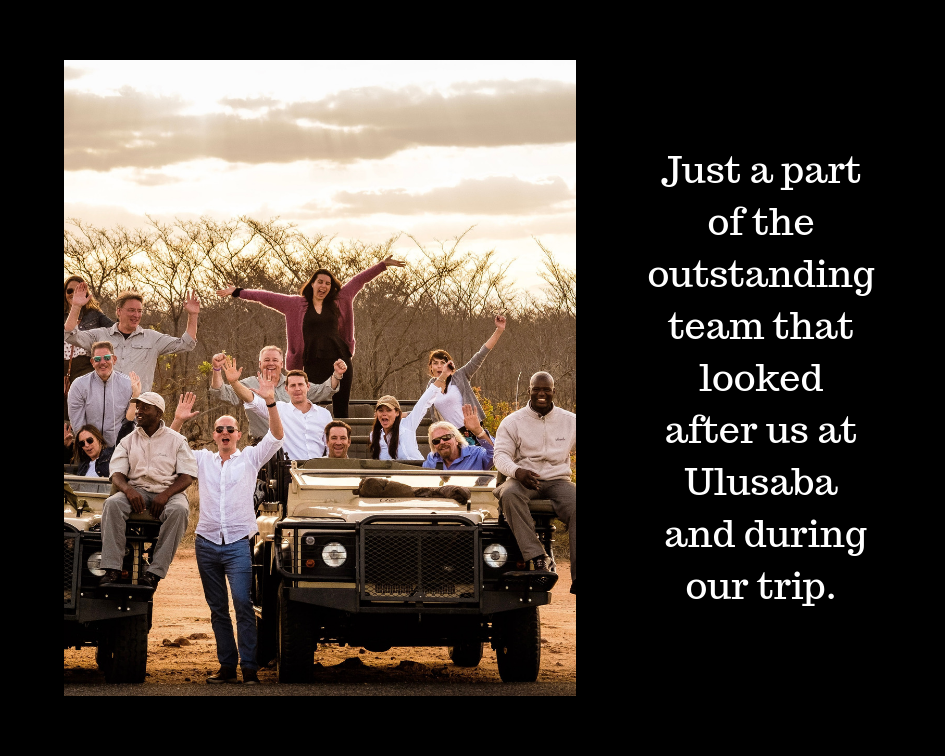 The Virgin Unite team is incredible. The service was phenomenal. Not only did they work around the clock but they were kind, caring, fun and a pleasure to be around.

Every one of them.

I asked many of the managers, and Richard as well, how they did it and the same answer kept coming up. They gave credit to their great team and said they always put their team first – even above their clients. Look after the team and they will look after the clients.

This also came up in another unexpected way.

At one point someone asked me what questions I had for Richard – the things I really want to know. So I thought to myself, here’s a guy who doesn’t just have competition to deal with, he’s also taking on governments and entire industries and raising a family.

We all have times when it feels like everything is against us and Richard is no exception. In fact, he’s got a lot more pressure. I wanted to know what he did when things got really tough, when he felt like he’d bitten off more than he could chew and didn’t want to get out of bed that day.

To my surprise, he turned it around on me and asked me if I had those times… which was actually really nice. It was like being coached by him.

We spoke about the challenges I’d had, like most doctors and entrepreneurs, and he offered two important pieces of advice.

Firstly, he again mentioned that having a great team allowed him to face his toughest challenges. Put them first and they will help you with everything else. The second thing was my next big takeaway, and that was…

This was a big one for me. I’ve always been big on leveraging my time and efforts, but this takes it to another level.

Richard didn’t believe me when I told him I was a good delegator so he quizzed Mare about it and emphasized again, delegate everything. That way, as the founder you can focus on the big picture and your family.

He wouldn’t have started more than 60 companies if he was trying to do it all himself, or even a little bit in each company. In fact, there is nothing he would not delegate (I say this because I was challenged by this statement and asked him.)

The only time he gets involved is if a phone call from him will get things done more quickly at a high level. Now, this might not be an immediate possibility for every entrepreneur right now, but it’s definitely achievable and a must. So start to delegate everything. 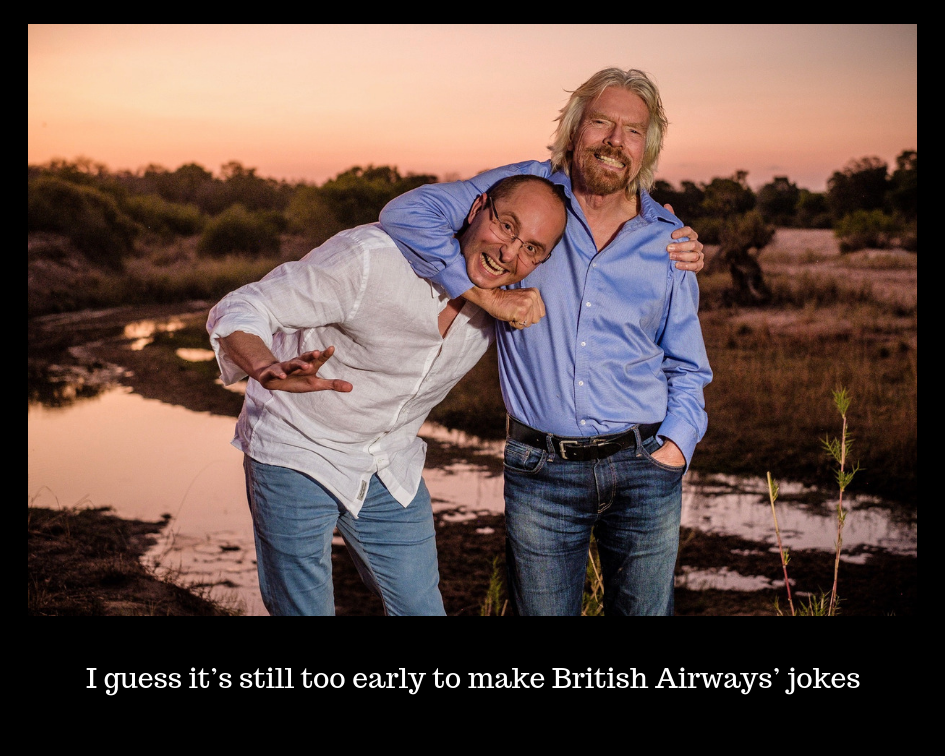 People take themselves way too seriously in business. If you know anything about Virgin, you’ll know that they love to have fun and pull pranks in good humour. And it’s a breath of fresh air.

As we were returning from our last Safari drive, Richard turned to us and said that he had some bad news. The chef had gone on strike. The kitchen was closed and we were going to have to make our own dinner. There would be a fire and we’d have to cook our own food. He was very embarrassed and apologetic.

Being the people we are, instead of being upset we started to look at the positive side of it and that it’s fine and we’d have a good time doing it. We bought the whole story.

As we arrived at the ‘fire,’ drums started to beat and we could see the blaze of an enormous bonfire with tribal dancers welcoming us to an outdoor feast and the chef was not on strike. He was there with his team cooking up an amazing goodbye meal for us.

The founder of the Virgin empire was just having a laugh. And when I took a photo with him, he put me in a headlock (ask me another time about the story behind that).

It’s ok to be human, to care, and to have fun. After all, business is about people and we love to have a good time.

This trip with Virgin Unite was a blessing and I have to thank our mentors Leela Cosgrove and Gulliver Giles who introduced us to it. It was a life changing experience for us and the impact if has on Virgins partner organisations is priceless. However it might not be doable for everyone.

At the same time, there is a burgeoning community of doctors who love to travel, go on adventures, would love to use their medical skills where they’re truly needed and feel that sense of real appreciation from people who truly value what you do – plus have an incredible holiday while they’re at it.

And that’s what we’ve created with our TanEx trip. We’ve used our lessons from our trip with Richard and create this one-of-a-kind experience.

With small group of fellow doctors, you’ll have a luxurious holiday and life changing adventure where you’ll grow, laugh, feel truly appreciated and come back a changed person.

If you’re interested in hearing more, then enter your details below and myself or Mare will be in touch.