The first issue of one of my clients physical print newsletters just arrived in the mail. 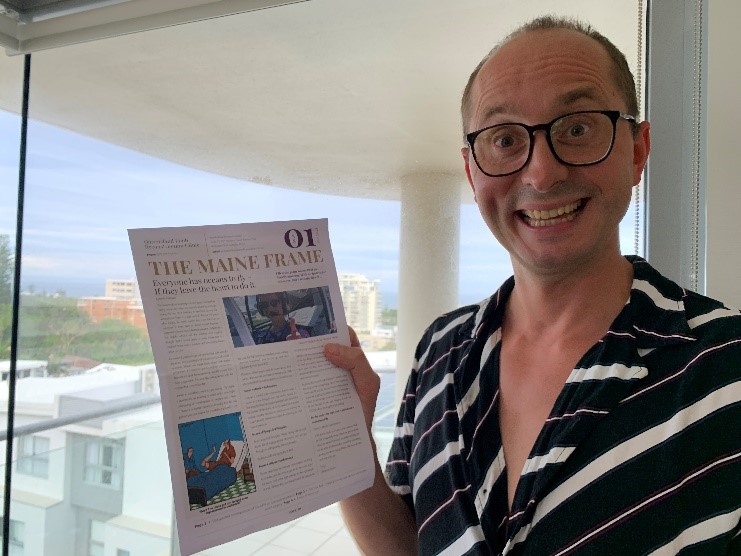 Me holding the first issue of “The Maine Frame”

An orthopaedic surgeon based out of Brisbane who is competing is a saturated market place where most referrers have established networks.

Plus she has a unique interest in two patient subgroups, recently had a child, is working in the public system and trying to build a house. So, a busy person indeed.

She’s faced with a problem: how do you get the word out about what you do without wasting your time or being a social media influencer?

It seems like if you want to stand out these days you have to be on Facebook or Instagram everyday, or have Google anoint you worthy of ranking in your SEO.

But those are what I call the flying cows of marketing.

It was a blockbuster. I don’t think I ever actually watched it but there was that famous scene where a tornado was sweeping through a rural town and a cow got picked up and started flying around. It was hilarious and, at the same time, terrifying. It made it clear that this twister was something else. It was strong and dangerous. You don’t want to get caught up in it because if it can lift a cow, what chance do you stand! Also, if there’s one cow flying around then there must be more. You don’t want to get struck by one of them.

There is a storm of activity around social media, SEO and websites. People are easily dazzled and wowed. And end up getting struck by a cow in the form of an expensive website, seo and a marketing agency to look after your social media.

How many of them are out there, flying hidden in the twister, ready to collapse onto you?

They stand out, but not in the way we want. They’re still part of the storm and if you get caught up in it it can be dangerous.

So how do you stand out in a safe and effective way?

Well, listen to this…

As you’re standing there at the edge of the storm, seeing the craziness there’s an even darker cloud in the distance with a lot of electrical activity around it.

It’s moving towards you yet you feel strangely calm.

It’s moving fast and suddenly it’s right over the top of you. As you’re staring up at it, it descents and you’re inundated. You can’t see a thing through the wind and mist.

Then there’s a light.

The mist clears and the wind settles just enough for you to see a spaceship like in the E.T. movie of the 80s.

A door opens downwards. More light. Now the lights have some colour – pinks, blues, greens and oranges shoot out from around and inside the door. You stand there, motionless and calm. An alien descents down the path created by the downward opened door.

It looks like an alien: greenish, big head and eyes, skinny body. It approaches you. You stand motionless. It stretches out it’s arm and index finger. The tip of the finger is clubbed and glowing.

He/she is going to touch your forehead with it and somehow you know that when it does it’s going to transmit some kind of profound, life changing, inspiring message or insight far beyond anything you could have ever known without this intervention. And you can’t wait.

You close your eyes ready to receive the message and…

Well, it doesn’t matter because the point is, the alien stood out far more than just another cow getting caught up in the storm.

It changed the entire story, was strange enough to get your attention, but familiar enough to be safe. It captivated and enthralled you and you forgot about the cows and the storm even though you were right in the middle of it.

It was the only thing in that wild storm you were listening to, wanted to hear from and hung on it’s every word and action.

That’s the effect you want to have on your referrers and patients.

These days social media, SEO or a fancy website do NOT do that anymore. You need to think differently to stand out. Avoid the flying cows and be the alien in a tornado.