I was doing a solo road trip around California a few years ago. A friend was getting married in San Francisco and my wife was like, “you should go over there to visit for a couple of weeks.”

I had the flights and muscle cars booked almost instantly (business was soaring so I spoilt myself).

My encounter with Mike Tyson occurred towards the end of that trip when I was in Las Vegas. I spent the previous week driving up and down California. It was an incredible experience. I start with a Dodge Challenger and drove it up Highway 1.

If you’ve never heard of Highway 1, it’s a winding road right on the edge of the water with incredible views. It also goes through Big Sur forest with its enormous Redwood trees. I remember pulling up to a motel in my Challenger, surrounded by this incredible forrest, with just a bag in the boot and a six pack of Budweisers – it was an all American experience.

When I woke up the next morning at 6am, jet lagged, and breakfast wasn’t being served until 8am, so I had 2 hours to kill. It was early, there was no one around and I was on one of the worlds best driving roads with a Challenger.

I spent that morning fanging it up and down Highway 1 gripping the steering wheel and trying to stay on the road.

I can’t even explain how awesome this was – there was a mist in some areas, the sun was rising, the views were incredible and the car was roaring.

After the wedding in San Fran I drove through Yosemite national park and then back down to LA through the wide open plains of inland California. I ended up spending a lot of time on my own, which I enjoy, but it was getting a bit much. So when I got to Vegas (after swapping the Challenger for a Mustang convertible) I was keen to interact with some human beings.

I was walking around one of the big hotels when I noticed that a sports memorabilia store would have Mike Tyson himself signing pictures in a couple of hours.

This doesn’t just happen in Sydney! I had to find out more. Turns out it was true – you just buy a picture from the store, he’ll sign it and you get to take a photo with Mike. This was never going to happen again – so I bought the photo.

Mike Tyson was world famous (and still is) for his boxing achievements and he’s also been infamous for the same reasons. He’s been successful and he’s failed. He’s been a great athlete and a struggling human and here he is, still going – he’s been on movies and toured doing a one man show. He hasn’t disappeared into obscurity and he’s fought this own demons to become a respectable member in the community. I like that.

We all have our challenges in life – some self imposed, others based on bad decisions in difficult circumstances. As Earl Nightingale says, it’s not what happens, but what you do with it that makes the difference. Mike embodies that as the person who fights through the challenges and aims to grow as a human to live his best life.

With all this in mind, I was pretty excited to meet the man himself.

This is when the lesson began that would culminate in Mike Tyson biting me on the head.

As I was standing in the line, there was a family in front of me. After days one my own I was keen to talk, but they weren’t talking to me.

I tend to be a reserved person. I don’t always go out to meet people or engage overtly with people unless I know them. At the same time as a tall, dark, eastern European looking guy (read: I look like a Russian mobster), people also don’t always engage with me. But when you’ve been alone for days, even someone as reserved as me steps out to engage.

I started chatting with the dad of the family about their holiday, where their from, why they were getting the signature. The guy was lovely, we had an awesome chat, which wouldn’t have happened if I didn’t engage, if I didn’t step out and do something different from my norm. I was pretty proud of myself, plus it made the time pass – the line was slow.

We were lined up out the front of the store snaking across the mall. Mike was in the store behind a screen so we couldn’t see him. Me and my new mate realised that the photo was probably going to involve standing next to Mike with our fists up in a boxing stance, which to be honest, is pretty boring and you can do that at any Madame Tussauds. No one would believe I actually met the real deal.

There had to be some kind of interaction. A high five wouldn’t work either because that’s just two hands touching – again, just like at Madame Tussauds – and a handshake is boring. There had to be more, but what?

Plus I wasn’t used to engaging in unusual ways and stepping out of the norm, especially with a celebrity like Tyson. With my realisation that I have to engage and step out of my comfort zone for life to get interesting… I realised what had to happen.

Then it was my turn. I was escorted behind the screen. There was no smiling. This was business. Mike was sitting on a chair at a table with a seat next to him and a photo of him behind the chairs.

I shook Mike’s hand, mumbled something embarrassing and sat down as I handed Mike my photo for signing. Then I got the instructions to look at the camera and Mike had the expected fists up for the photo. I took that as my chance and turned to Mike and said…

“Can you put me in a headlock?”

He was surprised. I don’t think this has happened before.

I said, “Can you put me in a headlock.” And I leaned forward.

Mikes laughing his ass off, I’ve got a former heavyweight boxing champion with a gorilla grip around my neck and then Mike decided to improvise.

I thought he was kissing my balding head. That would have been funny, but no.

Turns out those were his teeth pressing on my scalp.

His handlers were laughing. At that point I was too. It was pretty funny. They told me it was the funniest photo all day. I looked at my photo and yes, it was true. It was Mike Tyson putting me in a headlock and biting my head. This was more than I even imagined.

I had stepped out of my comfort zone, engaged with life and life returned tenfold. The next 50 people would have had the same standard boring experience. I asked a fun question and got a memory of a lifetime. That was a lesson I will remember forever – step out of the norm, engage with life because otherwise you’ll end up drifting by in a boring comfortable existence. Here’s to Mike! 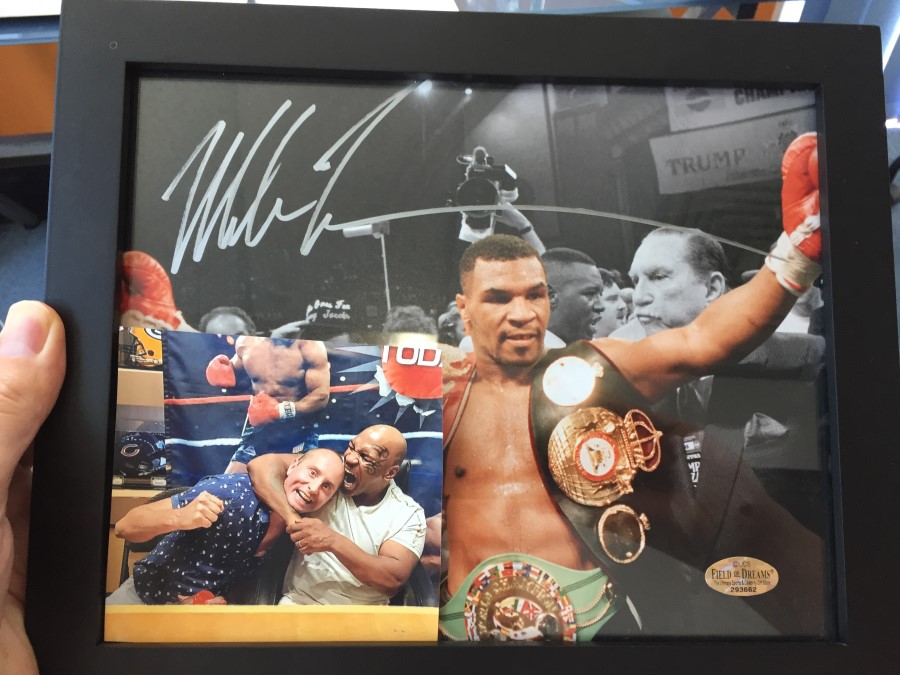