Ever wondered what it’s like for international students to study medicine in Australia? It is a thought that runs through my mind from time to time as I’ve pondered studying abroad myself.

How do they do it?

How do they support themselves financially?

What type of social and communicative barriers do they encounter and how do they overcome such obstacles? Especially knowing how hard life can be when we drastically change our entire environment.

Dr. Tharani Anandarajan has had to face all these obstacles and push herself in order to get through medical school. I met Tharani for the first time at Coogee Bay Hotel. As I approached the table at which she sat with, Siva, her partner, introduces me to her. Here I find out that Tharani had just gotten off a night shift and was lacking sleep and needing rest. Yet here she was, ready to tell her story for what it was then to what it made her today.

Tharani is an emergency department specialist, who is also a daughter of loving parents residing in Singapore, a friend of many, a wife to a loving and caring husband, and as her husband, Siva, puts it ‘a great sculler of beer’.

Coming from a traditional Indian-Singaporean family, Tharani’s career choices were somewhat limited by her elders. Doctor, dentist, lawyer, and engineer – pretty much most of the high-end jobs that any parent would want for their kids. But, Tharani was not entirely influenced by her elders; rather it was seeing her maternal grandmother go through a debilitating case of schizophrenia, and how the treatments were not effective then.

This sparked not only her interest in medicine at the age of 13, but motivated her to achieve high marks and study medicine at Adelaide University, Australia. You see, for Tharani, the primary exams, aptitude test, and interview phase was not an issue. Instead, it was convincing her parents that studying medicine abroad was her best chance of becoming a doctor.

Yet, at the time becoming a doctor was not the only thought that occupied her mind. Siva, a current postdoctoral research fellow at Brain and Mind Centre, showed his fondness to Tharani by delivering flowers to her parent’s house. Not knowing that she’ll be receiving flowers from a delivery boy, her father opened the door and was outraged at her choice for a partner. Meanwhile, Siva resided in Canberra continuing his study when three days later he informs Tharani that he sent the flowers. As hilarious as this may seem, it nonetheless sparked a deep sense of connection between them.

While she was flying over to Australia, Tharani was really excited and ready to start her new chapter in life. However, once she settled into her room and observed her environment. She was in an absolute shock. Not only did she move out of her family home into a residential college with one small room, but also she had to make new friends, learn the new social environment, and understand a whole new way of life.

It almost sounds daunting and something that we would not want for ourselves. But this is the key ingredient to growing up, to making yourself independent, to learning and education. In essence, this is what life is and how you decide to live- it all depends on your choices. To become successful in medicine or in any career, we will at some stage be put in an uncomfortable situation and it is through this that will make us or break us. For Tharani, as an international student living on the bare minimum, she was in survival mode.

For example, in order for her to financially support her medical degree, Tharani’s parents took out a mortgage on their home. After she finished her medical degree, Tharani sent pocket money to her partner who was struggling to find a job at the completion of his Ph.D., as well as help pay off the mortgage her parents took out. Once her partner found a job in Sydney she left all her friends in Adelaide and restarted making a new social circle for herself. This itself requires time, energy, effort, and most importantly composure over one’s mental faculty.

And that is not all, workplace bullying is rife and it’s affecting doctors too. Being female and a doctor in sometimes an almost male-dominated environment, Tharani was a victim of workplace bullying at some stage during her training days. I was flabbergasted to hear this and am ashamed to admit that such behavior would exist in our hospitals. Yet it does, and it’s quite disappointing. A part of the profession of being a doctor is dealing with ill patients as well as managing a section of a hospital. To be bullied and pushed into a corner is not part of the job description; in fact, it isn’t in any type of job. Tharani had to face this challenge head-on and keep doing her job as best as possible until a better offer came.

To me, Tharani is a modern example of an independent, hardworking, loving and caring wife, and a doctor for many females and males across the world to look at and learn from. Yes, there are many examples of great female role models who have achieved many great things. However, Tharani’s story is not just different but one that many people can relate and learn from.

When I asked her what her motto in life was, she replied without hesitation “This one!” pointing at her husband, Siva. And when asked where she sees herself in 10 years time, she replied “still working and kids”, to which Siva smiled. Tharani’s advice to any future doctor is to be prepared and the best way to do that is planning ahead. 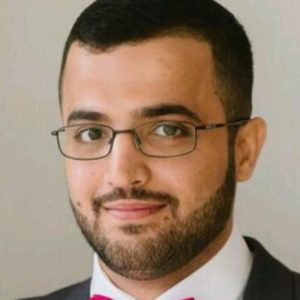