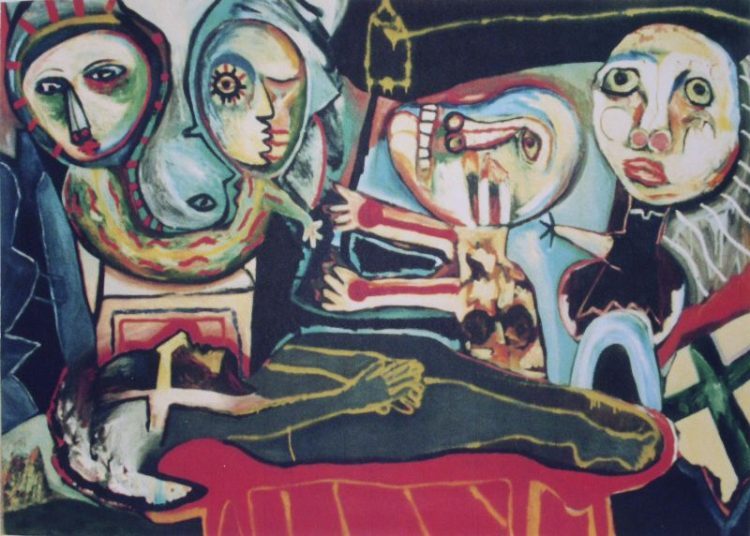 In 1984, artist Jon Cattapan’s sister, Adriana, tragically died in a car accident. His response to this very personal tragedy was a highly evocative painting, ‘Sister’. The painting comprises a grey-shrouded body reposing on a bright red structure in the foreground flanked by five figures in the background arranged in two separate groups. One group of distorted figures represents the spiritual world; the other living relatives and friends.

Some time ago a group of Melbourne based third-year medical students spent time looking at Cattapan’s works, which were being displayed at Melbourne University’s Ian Potter Museum of Art.

As part of their viewing, the Museum’s Academic Programs Curator asked the medical students to describe their personal interpretations of the artist’s narrative on the painting’s colour palette, style and narrative composition.

How did they interpret the prone figure in the foreground? Was the figure dead or dying? Which aspects of the composition triggered the most powerful response? Was it the figure’s gestures? Was it the Christian symbolism? Did the work’s vibrant colours evoke the most heartfelt response or was it Cattapan’s use of a deliberately jumbled assortment of formal elements in the composition?

The medical students were also asked to compare their initial emotional reaction to the painting to their thoughts after studying ‘Sister’ in detail for 20 minutes.

The objective of this exercise was not so much an assessment on the themes the artist was exploring in ‘Sister’. Rather, the exercise was a way of bringing to life an enhanced awareness of how easy it is for alternative meanings to present themselves in real-world experience. This learning exercise was a practical demonstration of “differential diagnosis”, a useful medical diagnostic method which calls attention to the problems which surface in rushing to a premature conclusion.

Healthcare professionals, be they doctors, dentists, optometrists or physiotherapists are increasingly expected to employ cultural, social and technical competencies that extend beyond their conventional biomedical training.

Moreover, some clinical teachers have observed that today’s graduates seem to lack the capacity for demonstrating empathy or skills in visually differentiating and prioritising what is important to “the whole person” rather than just the disease. Is empathy training the solution for bridging this gap in the student’s skill set? Can empathy even be taught to these students? How can we ensure students pay sufficient attention to the patient as a whole rather than focusing exclusively on the disease?

Over the last two decades, there has been an emerging interest in tapping into the humanities as a means of raising medical students’ awareness of, and sensitivity to, emotions and health care’s ethical dimensions. This emerging “Medical Humanities” philosophy has gained acceptance in US programs and internationally of the value of engaging students with theatre, literature, film, and dance, in addition to the creative arts.

Medical students visit the gallery initially in their First Year, and again during their Third Year when they are studying and experiencing hospital placements in Rehabilitation Medicine, Palliative Care, the Psychiatry of Old Age and Geriatric Medicine. Over three sustained hours, students in the program work on their attentiveness and interpretative skills and practice reflecting on their emotional response.

The explosion of science and technology in contemporary healthcare and medical education has influenced students in believing that there are right and wrong solutions to every medical problem. This is reinforced during their early pathology, anatomy and physiology training, which emphasis’s a bio-medical delivery model.

Most healthcare students entering the gallery are already out of their comfort zones and in a state of alert curiosity. The contrast between their bio-psycho-social training and their more experiential art museum immersion is stark. Moreover, the sheer diversity of perspectives that routinely emerge from the group conversations between students, which explore their gallery experience clearly demonstrates the reality of holding different interpretations of the same experience, without either of positions being intrinsically “right” or “wrong”.

The students’ teachers hope the gallery experience will bring their students to the realization that medicine is far from black and white, or right and wrong, but comprises many individual hues as well as shades of grey. The gallery sessions are designed to stimulate Australian students’ thinking about the importance of a diagnosis that embraces not just a patient’s physical symptoms, but also the broader narrative that brings to life a patient’s health story.

A Mother’s Determination To Achieve Her Goal

Refining Our Approach To Aboriginal Health